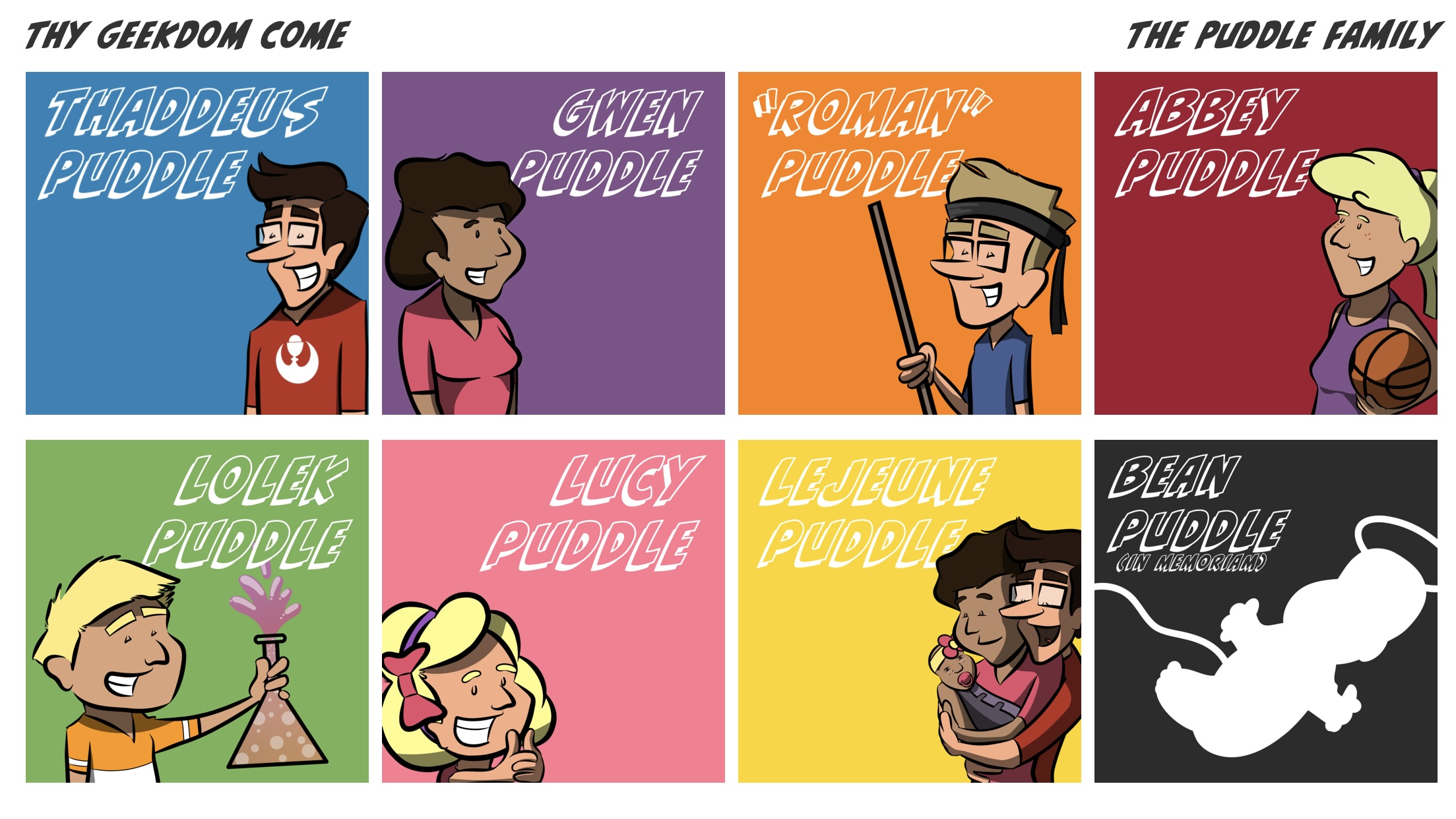 Allow me to introduce the Puddles. First off, that family name. Puddles. Weird, right? Well, it’s actually the name of my great-great-grandfather’s family. He was Polish. I saw his name on a genealogy chart and just thought it was fun. Tadeusz Kałuza. That’s Thaddeus Puddle to us English-speakers.

My Thaddeus Puddle is a rough caricature of myself, but — and this is important — he’s not me. He sometimes says things and more often does things I would not do. Like me, he’s a native Nebraskan. Like me, he’s a Geek-of-All-Trades. He has to be: he’s got a lot of kids and his full-time job is teaching theology to teenagers. Do you know how little they pay you to teach theology to teenagers? So Thaddeus works odd jobs in every industry, which gives me the chance to make jokes about every industry. It’s a marriage of convenience, unlike Thaddeus’ marriage to…

Gwen Puddle, née Robles, lovely Latina housewife who would absolutely never — never — use the chancla. (Or would she?) Gwen is a rough parody of my own wife, Mrs. Geekdom, who is similarly skin-toned and often fiery, but (sadly) not Latina. As Mrs. Geekdom and our marriage are interracial, I wanted that to be reflected in the Puddle family, but Mrs. Geekdom’s background is much more complex. Gwen, on the other hand, is a simple character. She wants to be a good wife and mother and also to fire off sarcastic glances whenever possible.

Linus Cletus Clement Sixtus Cornelius Cyprian Lawrence Chrysogonus Puddle — “Roman” for short because his names form the most memorable part of the Roman Canon — is the oldest Puddle child. He’s responsible, dutiful, and comes armed with a staff he uses for beating the puns out of his father. He’s the only member of the family blessed with his father’s prodigious nose.

Abbey Puddle is all sports and sarcasm. She represents the fiery side of my oldest daughter, who can whip out a comeback like a pistol. Of course, with a name like Abbey, she doesn’t seem at all like the threat she is.

Lolek Puddle, after a well-known nickname of St. John Paul II, is the brains of the operation, though often lacking in common sense. He enjoys science and inventing things, but also just expressing his opinion on most everything.

Lucy Puddle is a little ray of sunshine — if photons had mass. (Ahem, she packs a punch.) She’s little, she’s cute, and she’ll wrap you around her little finger.

Mrs. Geekdom and I lost a little girl to Down Syndrome, stillborn at full term, in 2020. We had to say goodbye to our precious Maggie. To honor her, however, and to promote the pro-life cause, I decided to let the Puddles keep their little girl with Down Syndrome, whom they named Lejeune after Venerable Jerome Lejeune, the Catholic scientist who discovered the genetic connection to Down Syndrome.

I honored Down Syndrome with Lejeune, but I also wanted to honor the many lost babies and their grieving parents, so we also have Bean Puddle.

Gosh, that was a sad ending to the family background, wasn’t it? But that’s what life gives us.

This is a good time to let you know that the Puddles are a reflection on a real-life family of 9 that struggles to pay the bills. So if you have a little extra in your paycheck, perhaps consider joining our patrons?